A History of the Breeding Program at  ARS Parlier

After the separation of joint almond breeding efforts between UC Davis and the USDA in 1948, USDA almond breeder Dr. Robert W. Jones moved the breeding program to the ARS Fresno station.  Until that time, the Fresno station had been primarily a table grape breeding location.  But the development of new stone fruit and almonds adapted to the harsh San Joaquin Valley environment was becoming important as growing locations shifted in response to California’s ever-increasing population encroachment in the mild coastal valleys.

Self-compatible almonds were not of concern to growers in the 1950s.  Production centered on the widely-planted Nonpareil, with breeding efforts focusing on developing effective pollenizers for the important variety.  Dr. Jones attempted to develop pollenizers that matched both bloom and harvest periods of Nonpareil, and had kernel characteristics that would allow blending of the kernels without concern for kernels being found ‘dissimilar.’  Breeding efforts and evaluations led to the release of ‘Vesta’ almond in 1968.

Almond breeding efforts continued in Fresno until Dr. Jones retirement in 1973.  The late-flowering almond accession ‘Titan’ was released in 1971, but its purpose was as a pollen recipient for

‘Nemaguard’ peach rootstock in the development of seed-propagated almond x peach hybrids.  After his retirement, almond breeding efforts ceased for approximately 20 years.  Advanced selections were sequestered to a small corner of the research orchard where they were grown for future potential uses. 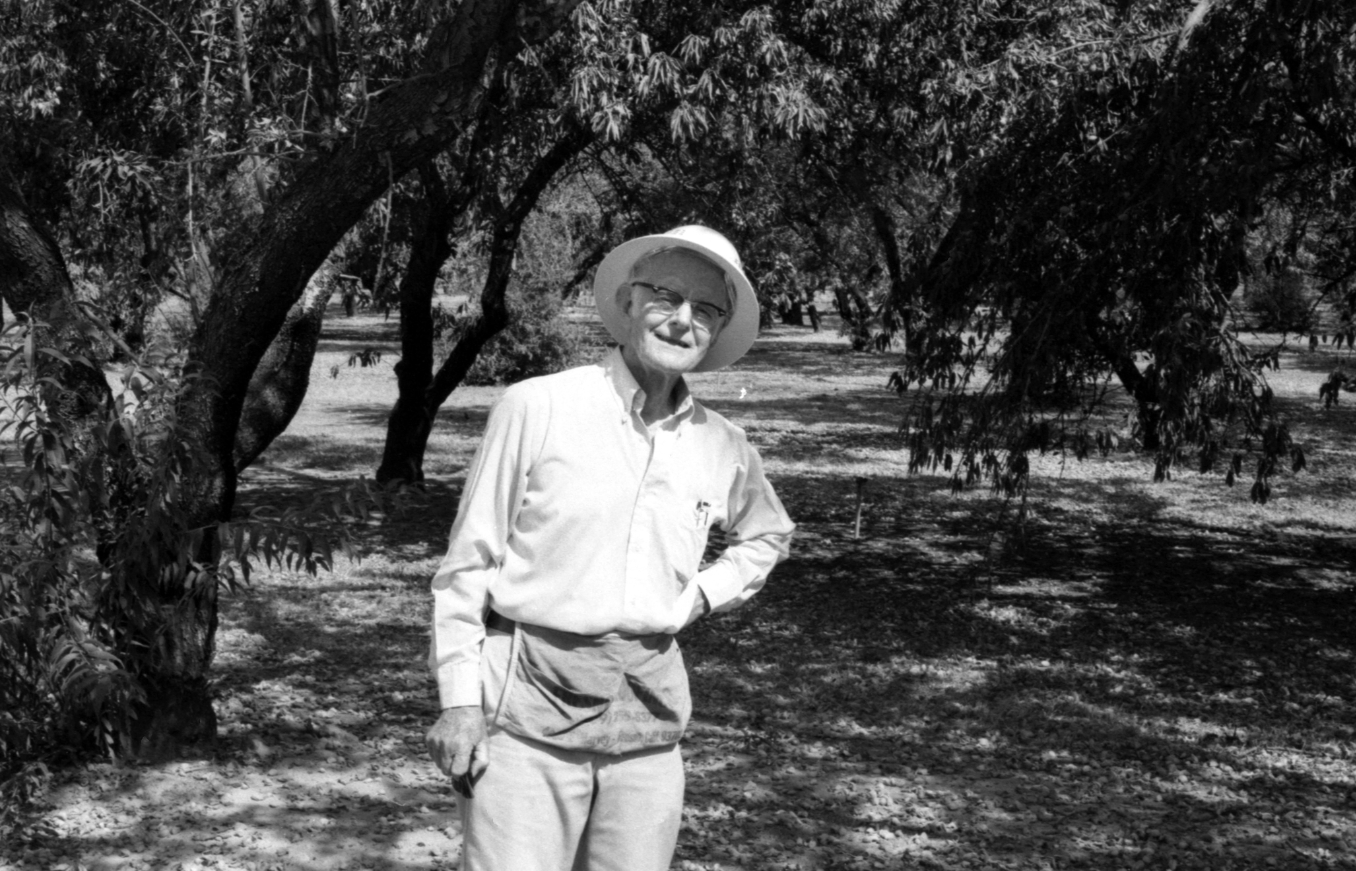 In 1989, Craig Ledbetter was hired as a Prunus breeder at the Fresno station.  Almond breeding had not yet been pursued after Dr. Jones retirement and the advanced almond selections were still available for breeding.  Ledbetter made new propagations of all remaining advanced selections and planted them at the developing ARS station in Parlier, CA where they could be evaluated for bloom and kernel characteristics.

The arrival and expected decimation of the California almond industry by invading Africanized bees was the impetus for breeding self-compatible almonds at the Parlier location.  The Spanish self-fertile cultivar ‘Tuono’ was imported for use as a self-compatibility donor.  Advanced almond selections from Dr. Jones program were all used in crosses with ‘Tuono’ to develop a baseline set of hybrids.  Self-incompatible seedlings were identified and rogued through pre-anthesis bagging when trees began to flower.  Self-compatible trees were used as parents in backcrosses to generally improve kernel quality and improve adaptability.

Numerous selections were identified from first backcross generation families that exhibit diversity in bloom & fruit development period, kernel quality and tree architecture.  However, depredation at the ARS Parlier station has been a consistent problem, and tree yields can only be estimated subjectively at the site.  For trees exhibiting quality kernel characteristics and an apparent adequate yield, shelling performance has also been used as an evaluation factor to eliminate poor performers.  The Regional Almond Variety Trials have allowed a complete evaluation for some of the USDA advanced almond selections.  Four USDA selections were included in the 3rd generation planting (2014) of these broad trials.  After four harvests reports on yield and kernel quality specifics, a decision was made to release one of the USDA selections.  ‘Yorizane’ was released in 2020 as a top yielding accession with high quality kernels and marketing potential.

Almond breeding continues at the USDA Parlier station, with a focus on self-compatibility.  Other traits of interest include early ripening in combination with a late bloom interval, Nonpareil-like kernels, and upright tree architecture.  New selections will be available for trial when the next generation of Regional Almond Variety Trials are established.